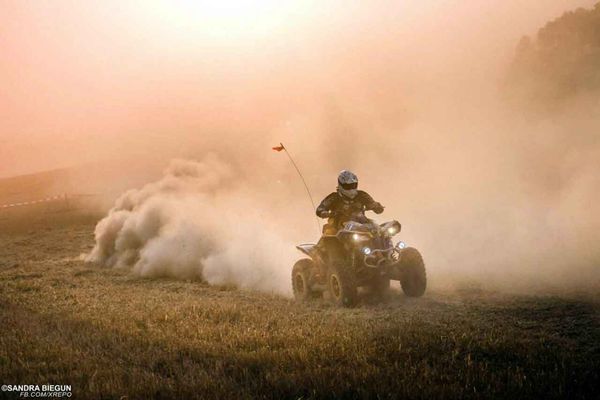 The All-Terrain Vehicle (ATV) or Quad bike as it is commonly known, is designed to handle a much wider variety of terrain than most other vehicles.

Quad bikes travel on low-pressure tyres and operate very much like a motorcycle, with the extra wheels giving it more stability at slower speeds. By design Quad Bikes are most at home in the dirt and mud and excel in rough and rugged terrain.

Despite being a street-legal vehicle in Germany, spotting one is unlikely as they are still relatively rare and not often seen on German roads.

Allow us to introduce Mr Franz-Josef Schneider, Branch Manager at Detlev Louis Regensburg, a known dealer for Motorcycles and sporting goods. After 12 years of Army service, he started anew as a salesman at Louis in 2008 and worked his way up, with the aim of eventually running the company. Four years later, his goal became a reality and is now the proud Branch Manager for the Detlev Louis outlet in Regensburg.

However, this alone does not make him a Tool Rebel…

Franz-Josef is an avid motorcyclist, and found it incredibly difficult to “hang up his motorcycle gloves” despite being injured in a serious incident in 2000. A few years after the accident, an opportunity arose, which he could not resist – to test drive a Trike and Quad through a local motorcycle dealership. He immediately re-discovered his passion for all things bike related, more specifically an obsession for Quadbikes. Accordingly, it did not take him long to become the proud owner of his first ATV, a 200 Yamaha Blaster – A two stroke, air cooled 200cc monster!

In 2013 and the following year Franz-Josef Schneider became a German ATV Racing Champion!

Sadly, he was unable to defend his title in 2015. However, he remains un-phased and certainly still full of vigor and passion! Franz-Josef has his mind and heart set on this year’s competition and is determined to win the title back!

“I am a person who tackles and cares.”

For us Franz Josef is a real Tool Rebel. Not just because of the fact that he is a Wera and Tool Rebels fan through and through (he has been quoted saying that if he cut his finger he would bleed green!)

“If I cut myself now, it would bleed Wera green! .

“It is his determination and passion which stands him above the rest and the fact that he challenges the status quo!

We at Wera wish him all the best for the coming season!!

For more information on the Madhead Racing Team click here.